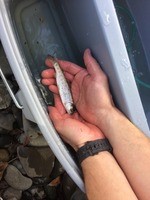 The San Francisco Public Utility Commission (SFPUC) has been surveying Alameda Creek’s native rainbow trout populations below the major dams for several years, to track population sizes and determine if resident rainbow trout are smolting. A smolt is a young trout after the parr stage, when it becomes silvery and migrates to the sea for the first time.

The SFPUC has been operating a screw trap and a fyke net trap in upper Alameda creek to sample native fish, and although only a handful of trout have been caught this year, some of them appear to be smolting. A smolt caught in 2015 in the upper Sunol Valley was definitely headed to the Bay to become a steelhead. The SFPUC surveys are confirming suspicions that our resident trout populations below the dam still have some migratory component that can smolt, go to the ocean, and return as adult steelhead.

A recent report by the Institute of Marine Sciences and Southwest Fisheries Science Center has documented that Alameda Creek’s landlocked rainbow trout above the major dams, in Calaveras Reservoir and San Antonio Reservoir, still have a strong genetic marker for migratory behavior. The report, Ancestry and Adaptive Evolution of Anadromous, Resident, and Adfluvial Rainbow Trout (Oncorhynchus Mykiss) in the San Francisco Bay Area, looked at resident steelhead/rainbow trout populations in the San Francisco Bay Area. Genetic analysis determined that resident trout in Bay Area streams are more closely related to native coastal steelhead than to Central Valley trout, that there is no evidence of interbreeding with hatchery rainbow trout, and that trout populations above and below dams and other barriers within Bay Area watersheds are each other’s closest relatives.

The study looked at an adaptive genome associated with migratory life-history traits in trout, and found substantial evolutionary differences between trout above and below Bay Area dams. Within the Bay Area, most trout populations above dams had low frequencies of alleles associated with anadromy (migration to and from fresh to salt water). However, in Alameda Creek, trout in Arroyo Hondo and Indian Creek, which flow into the large Calaveras and San Antonio Reservoirs, have retained the genetic variants and migratory behavior associated with anadromy. Alameda Creek reservoir fish had the highest observed frequencies of migratory alleles.

In other words, Alameda Creek trout below the dams still produce steelhead offspring, and trout above the dams still strongly retain the genetic marker for migratory steelhead behavior. Good news for using these trout populations to jump—start a restored steelhead run once the fish ladders are completed in the lower creek.

Ethan Rotman (Bayareatic) manages and coordinates programs that hatch fish in classrooms for the San Francisco Bay Area. He also chairs the committee that manages these programs throughout the state. Ethan has worked with the California Department of Fish and Wildlife for over 20 years.
View all posts by Ethan Rotman →
This entry was posted in Uncategorized. Bookmark the permalink.