Congratulations To Teachers In Santa Clara and Santa Cruz

A big thank you and congratulations to teachers in the STEP (Salmon and Trout Education Program) program who hatched native rainbow trout this year.

The STEP program generally uses steelhead eggs from a private hatchery in the Santa Cruz Mountains. For the second year in a row, the hatchery was unable to provide eggs for classroom incubation. CDFW made rainbow trout eggs available to all teachers in the program.

The experience was very positive for students and teachers alike as students were exposed to curriculum on anadromous and non-anadromous fish, elements of healthy habitat, and how human actions impact these habitats. The fish were released into a variety of popular freshwater lakes in Santa Clara and Santa Cruz counties. CDFW has received glowing reports from the teachers who opted in to this experience.

These teachers took on an extra burden as they needed to learn a new release site (as rainbow trout must be released into freshwater lakes that do not connect with a stream to protect steelhead) and they had to take on much of the work normally handled by their sponsor. They took on the extra burden and did it well. 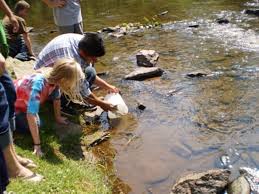 We have no idea what the future holds for this part of the Bay Area Classroom Aquarium Education Program as the combined issues of the drought, issues at this hatchery, and financial concerns for the sponsor are persistent. CDFW will continue to support all teachers trained to hatch fish in their classrooms.

Ethan Rotman (Bayareatic) manages and coordinates programs that hatch fish in classrooms for the San Francisco Bay Area. He also chairs the committee that manages these programs throughout the state. Ethan has worked with the California Department of Fish and Wildlife for over 20 years.
View all posts by Ethan Rotman →
This entry was posted in Uncategorized. Bookmark the permalink.